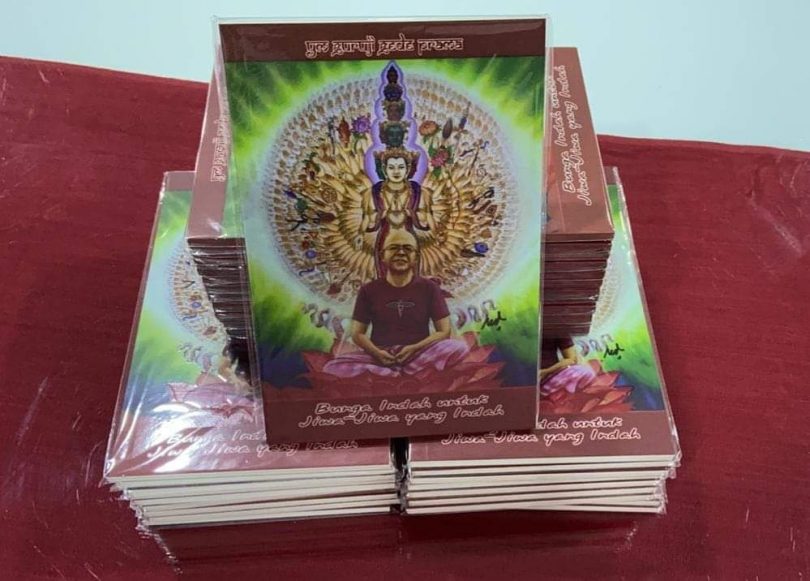 “Is it true that Guruji Gede Prama is a living Buddha? Isn’t it dangerous if ordinary people are worshiped like worshiping a living Buddha? ”, Someone once asked. As for the living Buddha, it is the student’s own personal opinion. It can not be prohibited. Like Guruji’s painting that have Avalokiteshvara Buddha behind it, it is entirely an initiative of Dewa Yoga.

Nobody ever asked for it. Nobody ever told him to paint it. Even when the costs of the painting were wanted to be paid, Dewa Yoga refused it. The same thing happened with the title of living Buddha who came from a number of close disciples. Nobody ever asked them. Nobody ever command them. As for the dangers of ordinary people being worshiped like worshiping a living Buddha, the answer is either can be yes, or can be no.

The answer can be yes, if one has not yet attained wisdom (silence). This title can enlarge the ego. Then give birth to inner arrogance. But the answer can be no, for someone who has reached silence. In the world of silence, students who worship beautifully is like a mother who buys new clothes for her baby.

The baby may not understand anything about the new clothes, but the level of happiness of this mother who buys new clothes is extraordinary. The same thing happened to students who worshiped beautifully, for the clear silent soul that was worshiped, the way of worship did not have any effect. But for those who worship, it has an extraordinary impact.

For those who are sick, worship makes the placebo effect (read: beliefs that heal) work. For those who metamorphose from healthy to enlightened, worshiping a teacher who is in silence, helping them to connect with the sacred teachings. Especially because the silence soul is a living scriptures. The frequency is the same as a living human. While old holy books do not necessarily have the same frequency as the energy frequency of humans living in this age.