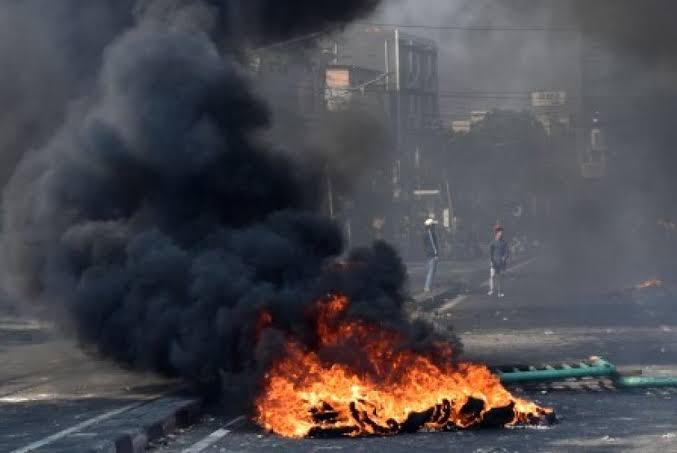 Once again, the capital city of Jakarta is rioting. And again it is all because of money and power. Human life comes to a drift again. If you befriend with anger, something like this can easily burn your inner peace. Not only does it burn the person in the inside, it will also burns the relationships between people from the outside. As a result, events that occur in one day can damage the quality of life not only for days, but also years. Many riots that occurred thousands of years ago, are still giving birth to mental illness today.

Pay attention to the sturdy and majestic wall of China. It was built because of the non-harmonious relationship between Chinese people and Mongols thousands of years ago. And as can be seen in the riots in Jakarta in 1998, where many Chinese descendants were injured and even lost their lives, there were seeds of hatred between the descendants of the Mongols and Chinese descent there. Though the burning animosity between Chinese and Mongols has occurred thousands of years ago. But still giving birth to hatred and anger, causing mental illness, and eating human lives even until today.

That is exactly what happens when humans befriend with anger. Human civilization will continue to burn with fire from day to day. Mental illness will appear again and again. Human life will disappear uselessly again and again. At times like this, it is worth pondering not to be friends with anger, but to learn to be friends with clarity. Never get angry at a burning fire. Never get angry at water that can make us wet. Indeed this is the natural law. In the same way, never be angry at the struggle for money and power that often ends in riots. Indeed this is the natural law since a long time ago.

From here can be born the seeds of clarity inside. Just like fish who swim in water, birds who fly in the air. Money and power since the beginning of time is full with an aura of violence. For friends who walk the path of salvation and peace, it is important to equip yourself with clarity like this. On the one hand, it is not burned by circumstances. On the other hand, the soul grows in maturity. At least not to extend the long list of violence that has been long happening in the past. In the eyes of anger that is far from clarity, riots such as the one that occurred in Jakarta on Wednesday May 22nd 2019, it is easy to slip to dangerous conclusions, the losers are the one who make it riotous.

Again, this conclusion is too simple and dangerous. What often happens is that politics, money and power are always far more complicated than any simple thoughts. Especially because the parties involved are mostly burned by anger. There are some statesman with a clarity of vision who were born in the political world such as Mahatma Gandhi and Nelson Mandela. But it is a super rare event. In an usual event, mud is usually visited by worms. Beautiful gardens are visited by beautiful butterflies. Money, politics and power are more often visited by anger than by clarity.

Although the event is very and super rare, let’s prepare for the birth of a new generation of leaders who are befriended with clarity, not burned dangerously by anger. Practical steps, reduce asking what and who is wrong. Expand your inner question on how your presence can beautify the environment. In order for the seeds of clarity to grow inside, in the midst of the complexity of the human condition it resembles three blind people who hold different parts of the same elephant’s body. Those who hold the trunk think that it is a snake. The one holding the foot suspected that this creature was a tree trunk. The blind man who was holding the elephant’s body concluded that this was a wall.

The question of who is wrong is guaranteed to keep people far from any clarity. And bring someone closer to anger. Then the situation will be more burning than ever. An invitation to all friends, change the question, from “who is wrong” to “what is the relationship between one opinion and another opinion”. It is this type of question that watered the seeds of clarity inside. Back to the question of the riots, on Wednesday May 22nd 2019, if we cannot clear up the situation, it is enough not to make matters worse. Like a muddy pool that naturally will be clear if left idle, frequent clarity will emerge to the surface once a person rests in perfect peace and silence.

For security tasks in the short term, there are already security forces working guided by rules and norms. But for long-term steps, never allow anger to steal our clarity. Instead, allow the clarity to sit on our anger. Only by doing so, the chain of suffering and anger that has lived thousands of years here on earth, slowly can be cut off and stopped. At least, the new generation does not give birth to the seeds of new hatred and anger. This is the path that is carried by the bearers of Light. Those who were born here to reduce any kind of danger. Remember beautiful souls, darkness is present because of the absence of Light.

“forgiving
does not change the past,
but will definitely change
the present and the future.”