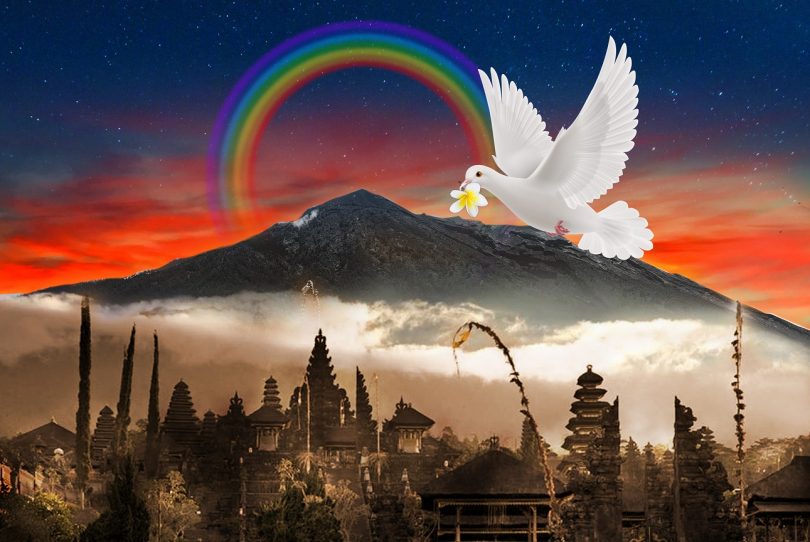 The quality of the net is visible in the middle of the sea. The quality of the hoe is visible in the midst of the hardness of the fields. In the same way, the spiritual attainment of a society can be seen clearly when disaster happens. If this is the measurement, the shadow of disaster caused by Mount Agung in September 2017 opened many secrets about the spiritual attainment of the Balinese.

As reported widely, the Balinese not only accept human refugees, even countless pets are welcome. A number of government officials are very careful not to contaminate the sacred messages with personal interests. And one thing that made many friends deeply touched, there was a voice of the sacred bell (kulkul) in Puri Klungkung (palace) even though no one tried to ring it.

Merged into one, there are symbolical messages that Mount Agung tried to share. We finally know, the thousand years of rituals not only cost money, but also illuminates the dark spaces of the soul. As is evident, the empathy of the Balinese people, not only blooming for their fellow human beings, but also blooming for the lower creatures like animals.

And about the sacred bell sounds without the touch of human hands, it is a spiritual reminder of life as a unified whole. Life as wholeness. Similar to a spiders web, whatever is done in one part, it will move the other parts. Suppose there is a soul that blooms beautifully, then the entire surface of the earth will get the beautiful fragrance.

Sadly, disasters that happen everywhere open the secrets, mother earth is like a dry garden that is deeply longing for water. It is not easy to invite people who are still hungry of this and that to cool mother earth. But the sacred bell at Puri Klungkung is a cosmic bell which is too important to ignore.

The most beautiful thing to do in this regard, let’s learn to water the dry garden inside. Especially because when someone cools the inner garden, they also cool the outer garden of earth. When we try to find the root of the roots, the warm life that happens everywhere is rooted in the old habits of people rejecting themselves. Those who have dark skin want to be white. Those who have long hair want it to be short.

In order to learn about watering the inner garden, the Balinese elders have a simple but luminous piece of advice: “Rwa bhinedane tampi”. As the peak of the mountain accompanied by the valley, any advantages are coupled with disadvantages. Wealth will be followed by complexity. Fame is close to temptation. Excessive pleasure will be followed by excessive pain.

Holding both of them as a wholeness, that is the seed of peace. That is why, in the old houses of Balinese people there is always a room of joy and sorrow (suka duka). It simply means, both sorrow and joy grow in the same field of mind. For that reason, train yourself to be the close friend of both sorrow and joy. The simple step of meditation, witness both sorrow and joy like watching garbage and flowers in the garden. Both rotate alternately.

In a deep spiritual language of the Western seeker: “When I love myself enough, life blossoms in a beautiful way”. When someone learns to love life as it is, by then there is flower blossoming inside. As experienced by deep souls, once the beautiful flowers bloom inside, then the surrounding nature also beautifully blooms (by which read: far from problem, away from disaster).

In the language of souls who are both peaceful and enlightened: “Nature understands the beauty of themselves through your eyes”. And whenever the beauty inside is met with the beauty outside, by then the soul really returns back home. That is why, on the roof of earth called Tibet, where there is Mount Kailash which is believed to be the Home of Shiva (the beautiful house of God), the enlightened beings are called of having a rainbow body (a body which is as beautiful as rainbow).

To put it simply, when a person experiences enlightenment, or beautiful souls pass away, then the sky bows respectfully by offering a very beautiful rainbow. At the same time, this is life as a beautiful offering. This is also why this small and simple article is called a beautiful rainbow that appears on the peak of Mount Agung. In summary, there is no imperfection, there is only lips which need more smiles.