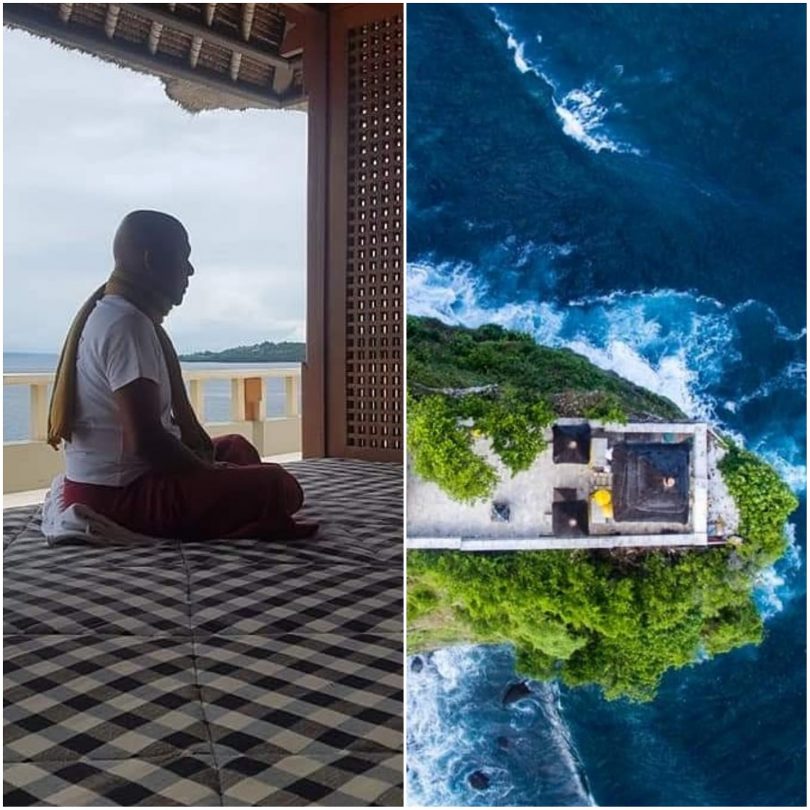 In its original place in India, shakti is associated with things that are gentle, tranquil and beautiful.  I do not know who started it, in Bali and in a number of other places the word shakti has long been synonymous with things that sounds like violence.  From a body that cannot be injured by sharp objects, cannot be injured by other people, to daring to start a fight and like to scare other people off.  Understandably, it is the time when people are less civilized.  Civilization has not been touched by much education, and the challenges of the previous time are very frightening, maybe the biorhythms of nature forces humans to maintain themselves like that.  In other words, it is part of the self-protective mechanism.  The way humans took care of themselves at that time.  Sadly, now that times have changed a lot, natural biorhythms have also changed, the earth has turned into a global village through social media, but there are still many people who understand shakti in relation to violence and fighting.

Few are aware that this way of growth is not only prone to inviting attacks from the outside, but also poisoning oneself in the inside.  Especially through pride, ego, revenge, anger, to a life that is far from peacefulness. This situation is similar to a teenager who is just learning about martial arts.  And suddenly feel himself is greater than the others.  Not only did his actions and words invite the attacks from other people, even his thoughts and eyes are also invites violance.  That is on a personal scale.  The same thing happened on a broader scale of society.  Still fresh in my mind, the island of Bali was injured by a terrorist bomb in the early 2000s. And now hurt again by the long corona crisis.  While many other provinces have positive economic growth, Bali has reported negative economic growth.  Leaders are faced with choices that are not simple.  If tourism is not opened, people can die from lack of food.  If tourism is opened, humans can die from the corona outbreak.  As a reminder, a few moments when the current generation of Balinese leaders were getting ready to lead, Mount Agung gave a sign that through an eruption, the continental coast was burning with fire.  The two of them gave a hot sign.  If the steps are not soft and smooth, greater harm can occur.

Returning to the story at the beginning about teenagers who are just learning martial arts, terrorist bombs and the corona crisis are not simple.  But it is hard to deny it, behind every attack from an outside person there is always self-defilement inside.  It is as simple as a husband and wife who are fighting.  The fault cannot be placed on the wife alone, or on the husband alone.  Both play a role in creating a fight.  The same thing happened with the terrorist bomb as well as the corona attack.  Like a fly entering a room, there is an element of filthiness there.  And what is worth pondering by friends in Bali in particular, it is difficult to deny that behind these dangerous attacks from outside, there is an element of understanding about shakti that deserves to be recollected.  The old understanding is not wrong.  Again, it is not wrong.  That was how people used to protect themselves (self-protective mechanism).  The things that we need to reflect on is that great danger is in sight.  In order for fewer flies to visit, let’s clean our inner house.  One of them is by having a more precise understanding of the word shakti.  The understanding that is more in line with today’s natural biorhythms.

The Compassion spiritual family has long been guided with messages like this: “The point of encounter between body, mind, feeling, spirit lies in the biochemical reactions of the brain.”  If a person is full of resentment and anger inside, the brain responds by releasing a hellish hormone such as cortisol.  This not only poisoned the inside, but also invited attacks from outside.  The situation is similar to a child who is overly afraid of dogs.  The excessive fear of dogs causes this child’s body to produce adrenaline.  This adrenaline is smelled by the dog as an attacking energy.  As a result, the dog barked fiercely.  The worst case scenario those dogs can bite that little boy.  The same thing happened with terrorist attacks and corona.  On the other hand, if someone is full of love, not only he/she can find peace as the peak of Balinese elders prayer, the brain will responds by releasing growth hormones such as dopamine and oxytocin.  As a result, not only the body will easily healthy inside, but it is much less likely to be attacked by outsiders.

Inspired by this, let’s contemplate the face of shakti which is more gentle, subtle, and at the same time reconciling.  In the past, stories about the frightening underworld were only word of mouth, and difficult to prove.  After spending a long time as a hermit in the forests of North Bali, some of the underworld shows itself.  Of course with a scary face.  Sometimes a snake with a chicken’s head, a flying snake, a large but short snake, a cobra, a woman with long hair whose feet do not touch the earth, the sound of footsteps that make the ground tremble, and other faces that make beginners afraid.  Strangely, when we look at them with loving kindness eyes, they would not hurt us at all.  They even bring guidance.  Provides many important lessons that match the biorhythms of the nature today.  Creatures with creepy outward faces like segehan (a type of food specially made by Balinese elders for the underworld), caru (sacrificial ceremonies), penunggun karang (their home).  Upon further examination, it turned out that there was a soft and delicate shakti face hidden there.

The segehan, caru, penunggun karang was made by Balinese elders not because our Balinese elders are afraid of them.  Again it is not.  But because the Balinese elders are full of love and compassion for them.  Refreshing the memories of the Compassion family, while fear makes our prayer’s journey goes down, beauty makes our prayer’s journey goes up.  In other words, it is the beauty of the heart that makes Balinese elders give birth to the old traditions of segehan, caru and penunggun karang.  So it is understandable, after the Balinese elders performed a ceremony to clean the earth in Bali in the 2000s, some time after the terrorist bomb exploded, the world media proudly called the island of Bali as the island of love.  In that bestselling book and film “Eat, pray, love”: “Good food is found in Italy, the most beautiful prayers are heard in India.  But the most beautiful love can be found on the island of Bali ”.  Like someone who gets a doctorate degree(S3), Bali’s achievement is like that, of course this is not an overnight work.  It is the fruit of the long journey of the Balinese elders for thousands of years.  What the new generation of Bali needs – especially formal and informal leaders – let’s learn to make a calmer and softer face of shakti.  As hidden behind the old traditions of segehan, caru and penunggun karang.

Provision for stepping so that life becomes beautiful

Friends who study quantum physics understand that the human mind can change small things such as cells, molecules and atoms, as well as changing big things like the natural surroundings.  Recent findings in the field of epigenetics have even concluded that humans can change the genes in themselves by changing their own thoughts.  To be precise, changing our perceptions about the environment.  For that reason, let’s start our change by beautifying the mind.  Learn to say goodbye to conflicting negative thoughts.  At the same time guide yourself to have positive-holistic thoughts.  In the language of the Balinese elders: “Rwa bhinedane tampi”.  As the ocean cannot cast off waves, roses cannot cast off thorns, man cannot remove sorrow, failure and misfortune.  Thus, stay away from the indulgence of children who only want to eat delicious things.  Live each life as nature goes through day and night.  In the language of leadership: “Look like the heavens, act like the earth”.  Protect every sentient beings on earth like the sky overarches the earth.  But while acting carefully, on earth there is a law that cannot be resisted: “if you touch fire you will get burn, if you touch water you will get wet”.

Since the time cycle is full of hot flames, stay away wisely from things that can create heat.  Draw close to things that spread tenderness and peace.  While never forgetting, the original religion of the Balinese people is the Tirtha Religion (holy water).  And until now the Balinese ceremonial procession involves many Tirthas.  The meaning that you want to convey, find the spiritual secret behind Tirtha.  Then take a step that is as gentle and smooth as water.  Chemically, water is formed by elements close to fire (oxygen and hydrogen).  Uniquely, when the elements that are close to fire are mixed and blended precisely, it becomes water that is soothing, calming and pacifying.  The call of the present, mix the fire of the times into soothing water.  To do this, stay away from the all-hot and harsh understanding of shakti.  At the same time, equip yourself with a softer and gentler meaning of shakti.

Just as the world of leadership begins with self-leadership (fully controlled self), personal growth also begins with self-love (being friendly and full of love with anything and who already exists).  Thus, cultivate the spiritual courage that is most needed in this era, namely the courage to be happy with anything and those people who are around you.  It heals and cools our inner-self, while reducing the possibility of external attacks.  A more practical step, learn to forgive the past.  Remember, there are no mistakes only lessons.  Forgiveness does not change the past, but it certainly makes the present a lot more peaceful.  Forgiveness may not change the other person, but it makes our inner soul garden so much prettier.  From forgiveness, grow towards love.  As beautiful as the love of Balinese elders who make segehan and penunggun karang for scary creepy beings.  Above all, find the most beautiful gem in the form of patience.  In conclusion, forgiving, loving kindness and patience, that is the face of shakti that saves, heals and reconciles most people in this age.  Happy Nyepi day to all friends both in Bali and outside Bali.  Om Shanti Hum.

Photo of Pura Luhur Uluwatu Bali from above courtesy of Omer Rana on unsplash, On the left Guruji is meditating

“If rose is a music, love is the lyric.”