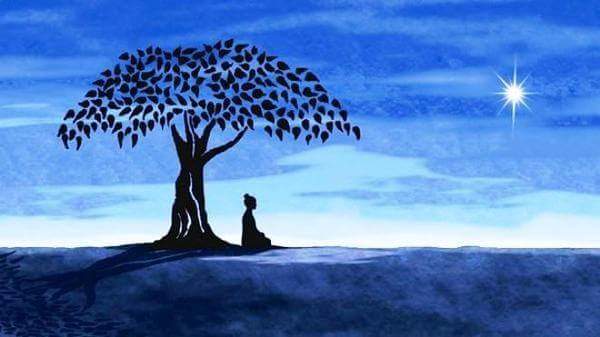 Around 2,500 years ago, a touching prince was born in North India. As soon as he was born, his mother passed away. It delivered a message, any human womb will be too small to accommodate this great soul. As soon as the baby arrived at the palace, the old spiritual adviser of the palace wept. Especially after seeing the spiritual signs in the body of the baby.

This beautiful Light, that was the prediction of the old spiritual adviser, will illuminate the world. But as soon as the Light shined, the old spiritual adviser died. And later on the last prediction came true, the prince who was later named Prince Siddharta, not only became a Buddha (a perfectly enlightened great soul), but also recognized by the Hindu holy book as the 9th Avatar (reincarnation of God).

While the birth of his physical body was characterized by the death of his mother, the birth of his great soul brought other signs and other lessons. When he was ready to attain enlightenment, which was marked by the honour of mother earth with a small earthquake, and the bowing Light in the eastern direction, Siddhartha was attacked by 21,000 troops of devils. From the very fierce one till the very subtle . From a very threatening weapon until a very loving temptation.

But the demons were not attacked back. Rather they were hugged like a mother who hugs her own son. In the language of meditation, Prince Siddharta deeply meditated loving-kindness and compassion. To make it concrete, the demons were seen as a collection of mothers who had given birth to him in previous lives. And these mothers came not to attack, but to perfect his loving-kindness and compassion.

Even if the demons tried to eat the body of Prince Siddhartha, he will be willing to donate his phisical body. Just like giving healthy food to hungry mothers. The end of the story has been recorded by the world. He has not only survived, but also giving birth to the Great Soul. Even 2,500 years after his death, his beautiful light is still shining brightly.

A prominent professor from the University of Oxford summed up these moments of enlightenment with a graceful language: “In the moment when Prince Siddharta accepted satan Mara as part of himself, from that time he was no longer Prince Siddharta, but he was a Buddha”. In short, never under estimate the healing and the liberating power of total acceptance.

What made the realms of gods tremble, when the last Great Soul firstly shared the Light, his first teaching was dukkha. Sadness, suffering, misfortune which are thrown away by almost all creatures in this samsaric realm, in the hands of Lord Buddha are transformed into the path to Light. Dukkha, as he taught, does not always make the soul enter the abyss. As long as one is able to transform it in the depth of meditation, suffering can help the soul fly.

Realizing that everything is flowing, that’s the first step. Flowers flow into garbage, garbage evolves into flowers. The opponent in this day can be a friend on another day. Once a person perfectly flows, by then he comes out of a small cocoon called ego. Then he was born into a butterfly of greatness.

With beautiful wings of greatness, then all places and times become beautiful gardens of peace. In this kind of spiritual garden, the soul will be naturally full of love and compassion. It is as natural as water which is wet, as natural as flower which are beautiful. And the compassionate expressions of the enlightened beings can be in any form.

A question that is often asked by many people, is whether the Great Soul will be reborn after death or not? For the followers of Hinayana (small vehicle), the answer is no. But for the students on the path of Mahayana (great vehicle), the absolute body of the Great Soul is beyond birth and death. But the relative body will remain here. For that reason, when the Dalai Lama was asked whether he will be reborn or not, he directly replied: “no doubt”. The last answer is closely connected to the relative body.

Acharya Shantideva even prayed in this way: “as long as there is space, as long as there are beings, let me be continually reborn again and again to share the beautiful Light.” In Hinduism, such sacred souls are called Vyuthana. In Buddhism, such beautiful souls are named Bodhisattvas.