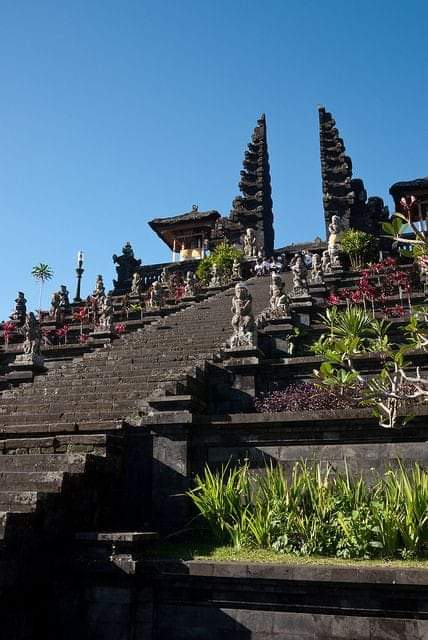 In Charles Darwin’s time, humans were seen as passive objects. Pursuant to Darwin’s theory of evolution, humans are the result of inevitable natural selection. In our time, the story is different. There are many scientists, such as Gregg Braden, who put humans as active forces who also shape the face of life and nature. Recent scientific findings have also shown, from the discovery of DNA nucleus of human bones extracted from ancient times, that humans play an active role in determining the face of world and life. In this regard, Bali’s name as the island of love is not only Elizabeth Gilbert’s fantasy in her masterpiece called “Eat, Pray, Love”, but also the result of Balinese elders’ persistence for thousands of years, which in turn has convincingly made Bali to be known by the world as the island of love.

There are at least three strong evidences which still remain until now, of how the Balinese people for thousands of years have diligently and sincerely shaped this island as an island of love. First, without any intent to take a less respectful view to other beliefs, for thousands of years in Bali, the underworld beings with frightening scary faces have been taken care of and fed with offerings. This is not an expression of human’s fear in the face of satan. Once again, it isn’t! Instead, it is an expression of perfect love. For ordinary souls, love is only worthy of being given to people or other friendly or noble beings. But for enlightened souls, love is worthy of being given to all beings, without any exception.

In simple but profound words, excessive hatred to the power of darkness only lengthens the long list of darkness already present in this world. And darkness is only present because of the absence of Light. In this regard, the Balinese elders are worthy of deep respect to have passed on such a deep spiritual teaching: “The power of darkness is not here to attack us; they are here to perfect our love instead.” In other words, it is only because of darkness that the Light may shine much brighter. And among all Lights that shine on earth, the brightest light is love in action.

The second evidence of Bali as the island of love is that the Balinese elders view the human soul as “dewa ya kala ya”. There are both a dark side and a bright side in the human soul. Such view is a strong and healthy seed of love. For the sick and suffering people, shortcomings are nothing but inner forces that are only worthy of being discarded. The harder they try to get rid of their flaws, the more they will suffer inside. By acknowledging both the dark side and the bright side of human soul, people are invited to see the whole and complete face of the human soul (or ‘holistic’ in modern language). The most universal symbol in this regard is the circle of Yin-Yang introduced by the elders in China.

There are both a dark side and a bright side. In the dark area there is a bright circle, whereas in the bright area there is a dark circle. The practical meaning is that there is bad in the good and there is good in the bad. If you are not careful, kindness can lead to anxiety. Especially if you expect too much that those you once helped will return your favour. ‘There is good in the bad’ means that it is only because there are bad people that the good people appears attractive and sympathetic. It is only because there are less beautiful women that the beautiful women appears much more attractive. These are the seeds of deep and wonderful love. There is a saying in the West, “When I love myself enough, life blossoms in a beautiful way”. When a person loves herself completely and wholly, life blooms beautifully just as a beautiful flower.

The third evidence of Bali as the island of love is that in places where nature make love, where feminine oceans embrace the masculine hills, there the Balinese elders built sacred sites. Temples in Uluwatu, Tanah Lot, Ponjok Batu, Pulaki, Sila Yukti are several examples in this regard. It clearly tells us that there is a very deep secret of the soul behind the encounter of masculine and feminine spirit. If we look deeper on why men are attracted to women and why women are attracted to men, it is because the soul longs for a union. Women, who are born feminine, are lacking of masculine energy; whereas men, who are born masculine, are lacking of feminine energy. A beautiful encounter between the two energy inside is what our souls have been seeking for in such a long time.

In holy scriptures, this kind of things finds its justification in Tantra teachings. That’s why saints with a spouse are only found in Tantra. Among others is Milarepa’s Teacher, Marpa. Another Tantra teacher, Saraha, even explicitly mentioned sex as a path to enlightenment; a foot-path that is strictly prohibited for beginners, especially because sex is like high voltage electricity. If you get shocked, you will certainly die. However, if you can transform high voltage electricity into light, the light produced therefrom will be tremendously bright.

In the world of healing and peace in the West, similar to the way of Tantra, there are those who recommend vitamin P (pleasure). One of them is sex. After explored deeper, it turns out there are thousands of nerves that connect sex organs with parts of the brain that produce healing, happiness and peace hormones. In a woman’s body, there are eight thousands of such nerves; whereas in a man’s body, there are four thousands of such nerves. This theory is supported by other findings which shows that women who are prone to breast cancer, in a large percentage come from a single parent, i.e. from a woman who had separated from her husband.

In short, there is a secret of Light behind the encounter between masculine and feminine. There is a story of love behind the sacred sites where mountains embrace the oceans. Deeper than that, there is a secret of healing, happiness and peace there; the most sought-after secrets in this era. And this secret would only heal and guide the soul back home if a person healed herself with love in action. From loving her family, loving her work or life calling, serving others just as serving God, to feeding street cats or dogs and taking care of plants.

Compiled into one, Bali’s name as ‘an island of love’ is not only the finding and fantasy of Elizabeth Gilbert, but also the result of the seeds of love which have been planted for such a long time here in this island, from thousands of years ago. The tree of love has grown old here. And because this era is very dark, this Light appears to the surface to illuminate the world. The invitation to all friends is: let’s be an ambassador of love in our daily life. At the very least, by less complaining and sharing lots of smiles instead. That is also why the meditation shared by the Compassion Family always ends with the beautiful mantra ‘Aham Prema’ (I am love, who is here to share love).