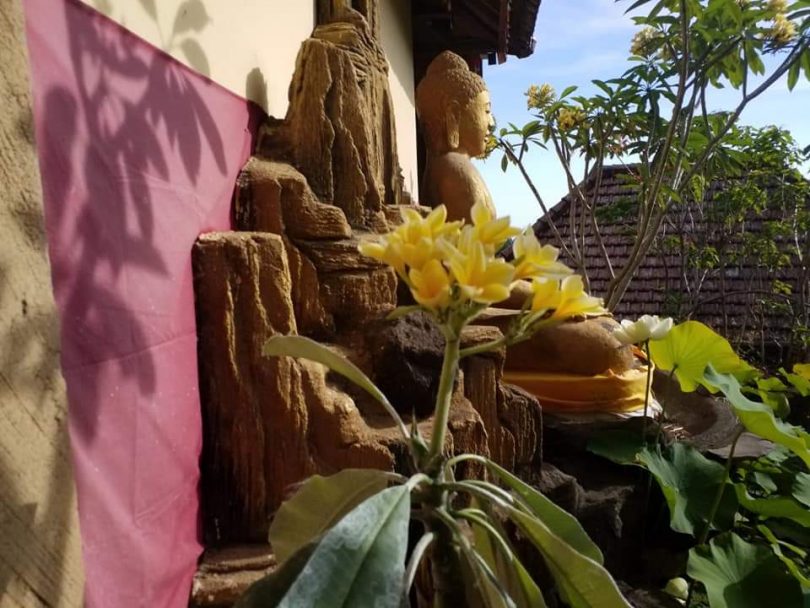 “I dreamt of killing people many times, please help me Guruji.” This was a question coming from a young man. It’s an example of a person whose body does not become a temple of healing for the soul, but a garbage bin which disturbs the growth of the soul. In the West a secret is opened, even children have started to have cancer. In the state of Montana, United States of America, suicide for the elderly is legalized. These are a series of stories that ask us to ponder: how can we make the most beautiful body in the samsara realm (read: the human body) to become a sacred place of healing for the soul’s growth? A question that has been asked throughout ages. Borrowing Saraha’s findings: “Ultimately, my body is my ultimate temple”. For the enlightened soul, the human body is a very illuminating temple.

Taking Care of The Physical Body

The human body is the most complicated machine in this samsara realm. As such, it cannot be healed just by using one discipline. Even a holy book alone, if not supported by other disciplines, does not help much. A more holistic approach is needed. As an ingredient to enrich the physical body’s healing journey, it is important to see the intestines as a second brain. That is, it’s not only the brain that chooses the right food and drink, the intestines also chooses. Through what comes out of the intestines, it is telling you what to eat. Friends who study microbiome (communities of bacteria in the intestines) have shared that a person who heals the microbiome is healing himself. He who kills the microbiome is killing himself. Sadly, through excessive consumption of antibiotics, gluten, sugar, caffeine, and canned foods, not a few people are unconsciously killing the microbiome in their intestines. At the same time, a few of the new generations are interested in eating fresh food that are rich in fiber, healthy nutrients that are good for microbiome.

The third brain that is worth pondering is the skin. As seen in meditation classes, sick friends have a less radiant skin. In short, the imbalance inside causes difficulty for the body cells to give birth to new cells. But do not rush into grief, there are longevity genes (genes that helps humans to live long) inside, which can help the cells inside our body to give birth to other cells in sufficient quantities. Borrowing the findings of a geneticist from Harvard, Dr. David Sinclair, this gene can be made healthier by maintaining the state of a slightly hungry stomach, doing intermittent fasting (for example, eating lunch and not having dinner, and taking warm and cold baths in turns). There are countless cancer researchers who conclude, as well as findings in the field of epigenetics, that lifestyle significantly determines a person’s health. From adequate nutrition, adequate exercise, to adequate sleep. Without proper care of this triangle, the human body is prone to bringing danger.

Taking Care of the Delicate Body

While respecting those with different professions, some healers informed patients who suffered from chronic diseases with a less careful approach. Without balanced by sufficient life motivational messages, people whose bodies were already weak were told that they had been affected with malignant cancer. Some even recklessly told the patients that their lives would only last for a few weeks. Of course the patients were shocked. Some even died afterwards. And what actually crushed them was not the cancer, but the belief system in those patients. The great work of cell biologist Dr. Bruce Lipton in “The Biology of Belief” clearly revealed the secret that only 1% of diseases are caused by hereditary factors. The rest is up to the way a person concludes his/her environment, which will determine one’s health later in life. And this belief, as has been proven through the placebo effect, plays a very important role in the healing process. That is why, a medical doctor named Dr. Habib Sadeghi who succeeded in healing himself from cancer concluded, what is needed in order to heal is not a human who wears a white shirt, but a human with a white heart (read: full of love).

This is an invitation to all friends; the body may have been diagnosed with a disease, but do not allow the belief system to be infected with the disease. Those who study the relationship between biology and psychology understand that humans can create a healthy biological body through a healthy psychological approach. And faith plays the most important role in this matter. Borrowing from Anthony Robbins, faith is a great power within that needs to be awakened. As a practical step, Dr. Bruce Lipton suggests the honey moon effect. Joy and excitement make the brain produces more dopamine, which enables the body to heal itself. Dr. Habib Sadeghi explicitly mentioned, there is cranial nerve zero in the brain which is very helpful for healing. Having fun activities that makes us healthy, such as sex with our spouse, really helps the cranial nerve zero.

In simple but profound words, particularly when we are sick, the subtle body requires the presence of positive energy as a balancing force. That is why, Norman Cousin who suffered from diseases full of complications successfully healed himself by watching funny hilarious movies, full of laughter, for 3 months. Combined with a strong and sturdy belief system inside, of course. This combination of a healthy belief and healthy pleasures is a very helpful recipe in healing the subtle body. If you want to go deeper, learn to do these three levels of evolution. From negative (nervous, anxious, angry) to positive (everything is a beautiful blessing). From positive to holistic. Sickness – health, happiness – sorrow, praise and curse are the same pair of soul wings. It’s similar to a mountain top that can’t be separated from the abyss next to it.

Friends who are healthy until they’re old understand that balance is the most needed spiritual nutrient for the human body. Balanced in the broadest sense. Balance between growing on the coast and mountains, between being still and moving, between giving and receiving, between material and spiritual life. Similar to finding the balance when riding a bicycle, there are no definitive guidelines. Only persistence to keep practicing to perfection throughout the journey. That’s why there’s a healer who once mentioned that the journey of healing is similar to making an art. There are no definitive guidelines. There are also those who conclude that the journey of healing is like climbing a mountain without a clear peak. Reduce thinking too hard about where the mountain top of healing is. It is enough to maintain balance throughout the journey.

Borrowing the advice of a very influential Master of meditation in our days Thich Nhat Hanh: “Peace is a step”. Peace, as well as healing, is in every step. It is not hidden at the mountain top afar. It is there, behind the persistence to become one with the present. It is no coincidence that currently, in English, it is called the ‘present’. Treat the present moment like a child opening a beautiful present. Fun, excitement, and happiness are there in the process of opening the present. The same thing is also recommended to friends who are already mature, learn to become one with the present. Hence, in Zen, there is an old saying: “Meditation is eating when you’re hungry, and drinking when you’re thirsty”. That is, become one with every step of daily life. Without rejecting the bad, without grasping to what is considered good.

As a direct result of this approach, the mind leaks much less energy through criticism and conflict. At the same time, the mind begins to learn connectedness as the root of all healing. The signs of a person experiencing connectedness is simple, his heart is full of gratitude, his lips often say continuous prayers of gratitude. In short, a flexible mind combined with a grateful heart, is a very healing medicine. It not only heals the super subtle body, but also heals the delicate body and the physical body. This is mainly because the three are linked to one another. When these three bodies are linked in harmony, there the human body becomes a place that heals the soul. There also the body can tell of what should be done in every step. This is what Saraha meant at the beginning of the writing with the conclusion: “Ultimately, my body is my ultimate temple.”