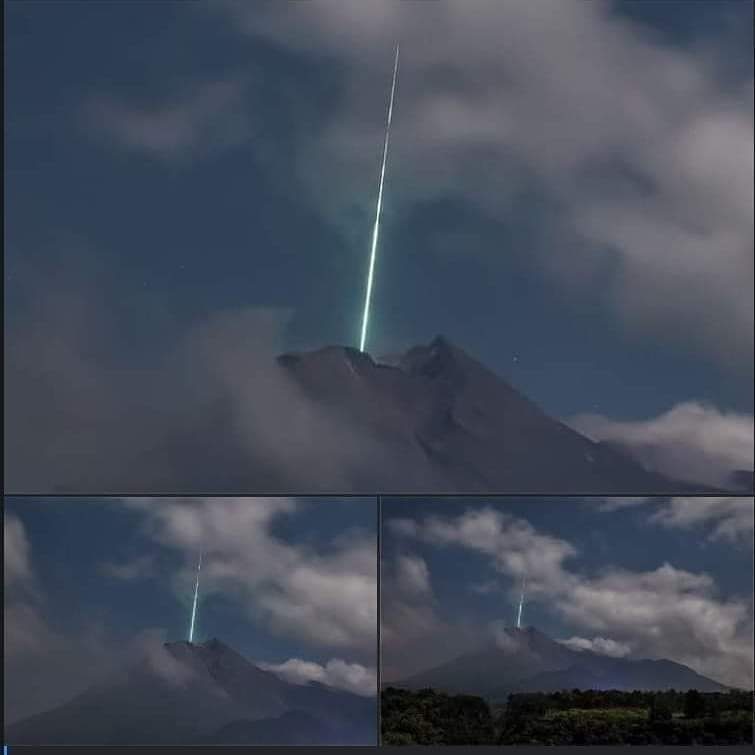 Last night, after the sky gave 3 beautiful signs (Waisak, full moon and Eclipse), on 27/5 2021 at 23:47 Java time, a very beautiful light appeared at the top of Mount Merapi.  The location is not far from the Borobudur temple (photo attached).  It invites many question marks, what else does the sky want to tell you through a beautiful sign like this?  It’s hard to deny, this age of time is very dark.  Mentioning examples will only prolong the already long list of darknesses.  Since its Light appears on the top (head) of the Mountain, it is worth contemplating what has happened in some of the peak of the earth.  One of the grandsons of the Japanese emperor revealed that whenever disaster strikes in Japan, the emperor will not come out of the prayer room for days.  Then apologize profusely to nature and God.  Mainly because the disaster signaled that there was a stain on the mind and heart of the emperor.  At the head of the Tibetan earth once happened, no matter how many times the king built a monastery, that same amount the monastery was torn down by demons. Then HH Lama Padmasambava arrived.  He did not fight against the demons, but these demons were promoted to become a guardian force.  And finally, the Samye Temple could be established.

Lessons learnt, be careful of being a leader.  Not only does his/her decision affect the lives of many people, even the slightest stain on the mind and heart can affect the environment.  In the language of quantum physics, the human mind can change small things like atoms, it can also change big things like the environment.  And during the past time, humans are called heroes because they dare to fight.  Once again this era is over.  This is the era where humans are more likely to be called heroes if they dare to share the bright light to light the others.  Especially through daily life example.  At least by being an honest person in a time of age where many people are dishonest.  At least do not become cunning when many people are drowning in cunningness.  If the current world leaders are the reference, it seems that this hope will be difficult to become a reality.  As this is the case, it is time to find as many informal leaders as possible.  Those who lead not because they are in the seat of power, but they lead because their daily life gives good examples.  The one who leads not because he/she has a lot of money, but because his life shares a bright light.  In Mahatma Gandhi’s language: “My life is my message”.

In the language of the spiritual world, this age of time longs for the appearance of old souls to heal the world.  Those born not because they want to collect money, but want to share the bright light.  Here are some characteristics of old souls so that friends have references and guidelines.

If a person has at least 3 of these 13 marks, or even more than 5 marks, there is a good chance he or she is a mountain’s peak person who came down from the mountain to heal the world.  Because the Light appears at the peak of Mount Merapi the day after the 3 beautiful signs from the sky in the form of Vesak, full moon and Eclipse, it is worth pondering deeply on this message: “Religions are like climbers from all different directions.  But just a matter of time all will reach the peak of the same love.  In other words, try not to let yourself being dragged by public opinion against religion.  Lift up your soul journey by focusing on practicing love and compassion.  Again, practice love and compassion.  Because in this cycle of time the authority and charisma of words had decrease drastically, speak to people with the language of daily examples.  Because the cycle of time is filled with many people whom are full of anger, just being not angry can be called a good example, not just getting divorced can already be called a wonderful example in this day and age.  Especially if you can experience a beautiful aging.  Having children and grandchildren who are also growing up beautifully.  The light shared will be much more convincing.  As a provision to grow, no matter what happens always remember this message: “It is your smile that is intended to change the world, do not let the world changes your smile”.

Photo caption: Just one day after the sky gave a sign through 3 beautiful signs in the form of Vesak, full moon and Eclipse where the masculine sun make love to the feminine moon, exactly at 23:47 aka 13 minutes before midnight, a very beautiful light appeared at the top of Mount Merapi  which is located not far from the Borobudur temple.  The photo was found on Lathifah Ambarwati’s FB account.  The news about the appearance of this light was also confirmed by the Center for Investigation and Development of Geological Disaster Technology (BPPTKG) as reported by Kompas.com