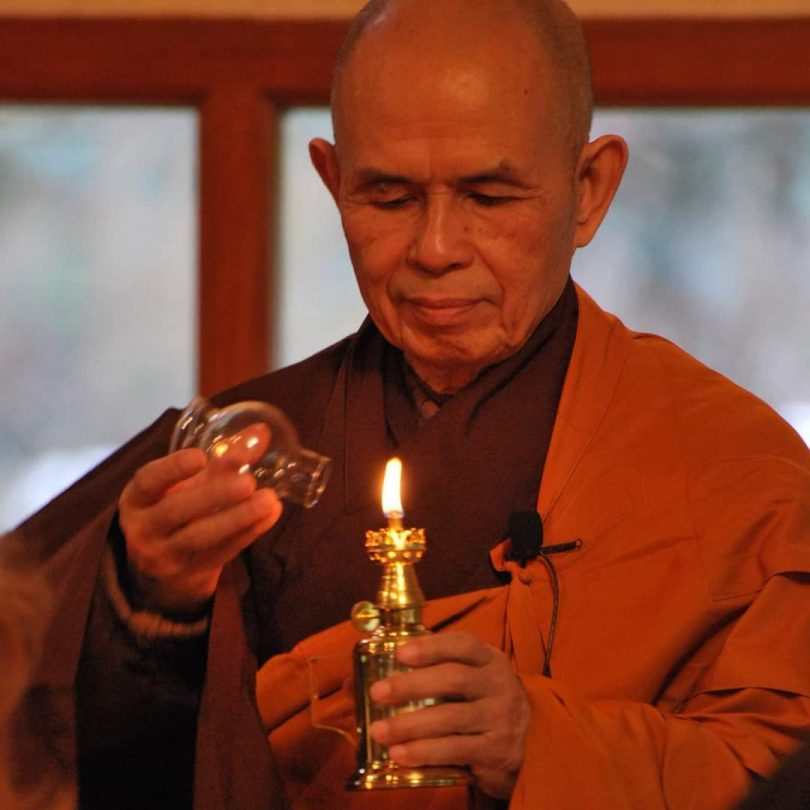 As a young person who was interested in studying spirituality in his 20s, the work of HH Thich Nhat Hanh (nicknamed Thay) was the main unlocking key.

Although Thay was a Buddhist monk, he never exalted Buddhism and despised the other religions. Never!

Not many teachers can combine deep accomplishment into a simple language.  And Thay is one of the very rare Gurus in this regard.

One of the sacred teachings that is too high for ordinary people to understand is the Prajna Paramita Sutra.  But in the hands of Thay this teaching can be digested easily and beautifully.

As someone I have personally met in Jakarta, I must tell here, HH Thich Nhat Hanh is a true living Buddha.

Listening to his story from only a few meters away, Guruji’s tears flowed profusely.  Even for over an hour.

The same experience also occurred when meeting HH the Dalai Lama in North India in 2008. In the language of energy researchers: “Energy never lies”.

High-level Masters like HH Thich Nhat Hanh have great energy vibrations.  It is like a magnet with great attraction.

Which draws many beings out of darkness, then elegantly leads mankind to tread the path to the Light.

So it is understandable that Martin Luther King Jr. crowned HH Thich Nhat Hanh as a saint who deserves to be awarded the Nobel Peace Prize.

In short, it is rare to have a holy Guru like Thay.  So it is a very beautiful blessing if it can be lit by the lanterns that he shared.

It would be even more wonderful if you could pass Thay’s lantern on to as many creatures in this world as possible.  Goodbye HH Thich Nhat Hanh. Rest in Light.

Thay’s physical body was indeed carried away by death.  But his Dharma’s body and Thay’s lantern will remain in the hearts of countless disciples here on earth.

Deep bow. Deepest love. From the island of love Bali.