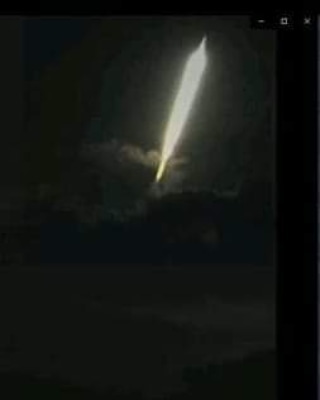 When the beautiful light that appeared on the peak of Mount Merapi, Central Java a few days ago, was still being discussed by many people, suddenly on the top of Mount Raung, East Java (4/6 2021 at 19:50 WIB) a beautiful light reappeared.  As reported by detiknews.com, LAPAN(National Institute of Aeronautics and Space) confirmed that it was not a meteor.  The BMKG ( Meteorological, Climatological, and Geophysical Agency) also confirmed the appearance of this beautiful light.

This beautiful light is green in color and lasts for 10 seconds.  Upon examining the shape of this beautiful Light, it resembled a sword.  The epitome of heroism in the past.  The difference is, if in the past the hero was identical to the person who fought, in this era the hero is the one who shares the bright light.  Especially through his daily life example.

In ancient times, heroes were synonymous with people who were filled with heat.  Once again because in an atmosphere of war.  In this era, heroes are closer to the souls in which they are filled with coolness (calmness).  Especially because the heat of the era longs for the arrival of souls filled with an aura of coolness.

To be contemplated together, in ancient times the enemies attacked almost all came from outside.  Such as invaders, robbers, thieves and others.  In this time loop, countless seekers of Light agree, the real enemy is not outside.  But it is resided in the inside.  One of the most commonly cited internal enemies is negative emotions such as anger and resentment.

I hope it does not happen, if a super power country that has an atomic bomb with a super powerful explosive power is super angry and super vengeful, in just a matter of minutes, this beautiful planet called Earth can be destroyed.  The invitation to all friends, let’s learn to tame the dangerous enemy that lies within.

Once you become the close friends of the hero in the inside (read: win against anger, revenge, etc.), you will naturally become a hero on the outside.  At least you become a hero because you don’t join in spreading violence.  Do not live life by making other people angry.  And hopefully becoming able to spread peace.

Provision of steps for close friends

Because the most dangerous enemy inside is called negative emotion (feelings), let’s learn to explore our inner emotions.  The beautiful masterpiece in this regard is entitled “How emotions are created” by Lisa Fieldman Barrett.  This researcher is right in concluding that human emotions are shaped by dynamic interactions between the brain, body and environment.  And the brain is the most decisive factor.

In order for friends to quickly win against the enemy inside, as early as possible train the brain to be diligent in smiling.  To be precise, stop being a servant in front of the brain (read: everything that appears in the brain is followed).  Then learn to be the master in front of the brain.  Every time there is a signal from the brain, let it settle first, filter it again and then use your feelings.  Train yourself to respond to the brain with a smile.

A smile that is guided by understanding, what the brain calls wrong is really part of the same smile of wholeness.  The explanation is, just as nature can not throw away the night, just as roses can not get rid of thorns, humans also can not get rid of sadness, failure, including things that are called wrong and bad.

Equipped with this kind of wholeness Light, it is unlikely that the friends will respond loudly and fiercely in the daily life.  It will be unlikely.  At the same time, a cool water source that never dries up will appear inside.  In Eastern philosophy it is called wisdom.  From this wisdom was born a super beautiful baby named compassion.

From this spirit will be born the heroes who are most missed by this era.  In order for the provision to be clear and transparent, here are some material for reflection for friends of prospective spiritual heroes who will bring a cool breeze to the world:

“In the moment of loving, you are a beautiful rose.”