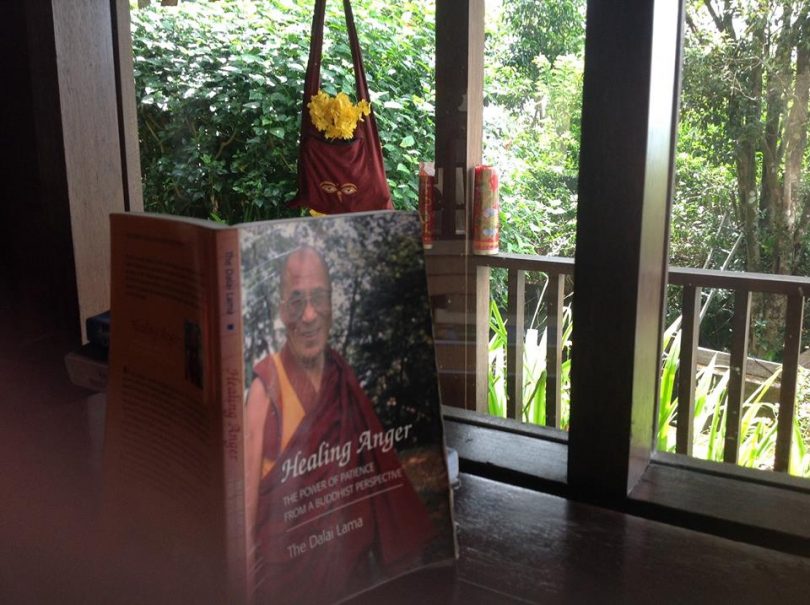 One of the homework of mankind that shows no sign of completion is healing anger. Although the various religious norms that forbid anger has now been thousand of years old, the existence of jail as the institution that punish anger has also been thousand of years old, yet there is no declining sign of human anger. In some parts of the world, the human anger is getting even worse. Though it is getting way more difficult and complicated, there is nothing wrong to try and try again. In the field of clinical psychology in particular, it has been ages since human being tried to expel anger and other mental illness using pharmaceutical drugs. Without any intentions of saying that pharmaceutical drugs are futile, as well as being aware of the complicated complexity behind any kind of mental illness, the residents of mental hospital is clearly showing a great significance number of increase here and there. Thus explains why in spirituality, the number of Teacher (Guru) who want to help the students to heal from anger is more than just a few.

One of that many Teachers is His Holiness Dalai Lama. Similar to the spiritual architectural designer of the Bali island named the Great Guru Mpu Kuturan who is a Mahayana Buddhist priest, HH Dalai Lama is also a Mahayana Buddhist priest. The specific name of Mahayana teaching is Bodhi Chitta (the enlightened mind). The absolute aspect of Bodhi Chitta is called ‘shunyata’ (emptiness). Sometimes also called silence. The Balinese elders called it as ‘nyepi lan ngewindu’ (the ultimate silence). As the natural nature of flower that is beautiful, the natural nature of water (Tirtha) that is wet, the natural nature of mind that enters the tranquility of silence will bloom in the form of a beautiful heart. The Balinese elders called it as ‘urip lan nguripi’, which means to live and to dedicate life entirely for others (compassion). There are many ways of entering the gate of silence, from yoga, meditation, prayer, ceremony, etc. The characteristic of a lucid mind is very simple. What so-called kindness by many people is similar to the mouth. The so-called crime by many is similar to – apology – the anus. And in any human bodies, including the body of a holy being, there is an anus.

The society and the human soul are also similar. At any time, in any place, both the mouth and the anus will always be remained in the same body. Anyone who gains this understanding through a self-achievement – not through words – would reach the level of S3 (simply smile and smile). Not just a regular smile. But the smile that blooms in the garden of understanding, in where there are beautiful flowers, there are waste. When there is a time of admiration, there is a time of scorn. Just like the mouth and the anus. After passing this stage, it does not mean that one will become ignorant and uncaring. Returning to the former analogy, as the natural nature of flower that is beautiful, the natural nature of water (Tirtha) that is wet, the natural nature of silence always bloom in the form of a beautiful heart. Someone having this kind of heart would not only be healed from anger, but would also be sharing Light to many people. If HH Dalai Lama is used as an example in this regard, the glorious shine of the Light is beyond any imaginations. He has been awarded with a Nobel Peace Prize and was once appointed as the citizen of honor by both the US Senate and the Canadian Senate. What a wonderful example of healing.