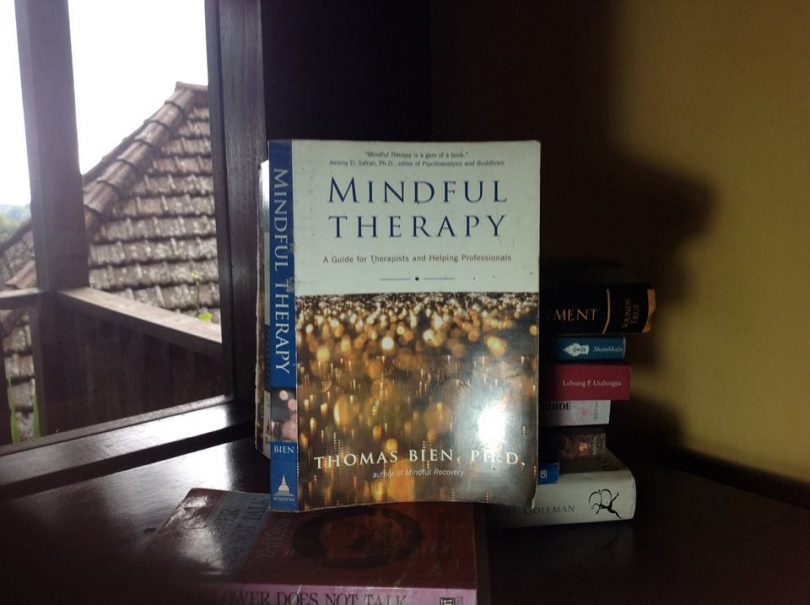 Every human being is a unique combination. So is Dr. Thomas Bien, the author of “Mindful Therapy”. He is a PhD in psychiatry whom also happened to be the one who found the “spirit” of meditation. It is rare that anyone could find such a unique combination. Successfully achieved the highest level of Western education, yet deeply understand the spirit of Eastern wisdom. The result is predictable, Thomas Bien not only becomes a healer, but also growing into a whole soul. It is brilliantly shown in each of his work. Notice the way this mindful therapist defines meditation: “Meditation is the art of finding a beautiful home within”. So simple yet profound. As seen here and there, the anxious and restless souls – moreover the sick ones – show the same characteristic of a person failing in finding the beautiful home within. As a result, they start to seek for it all around. All that efforts of searching, apparently, should end up in the finish line named disappointment.

Unlike his predecessor named Sigmund Freud (one of the founders of psychology) who love to intervene thru pharmaceutical drugs, Thomas Bien prefers to have a certain distant with it. He strongly emphasizes the “interaction process” between the healer and the patient.
Borrowing the old legacy of a well-known psychologist Carl Jung, the depth of empathy of a healer is crucial in the process of soul healing. Therefore Thomas Bien repeatedly repeat this message: “Hold your concept loosely”, which means to eliminate the possibility of bringing the concept from elsewhere to judge a patient. At the same time, listen empathetically to what the patient is saying. The practice of mindfulness (total awareness) will be very helpful in this regard. In concrete, while empathizing with the patient, remember to always be connected with the anchor of the breath. Whenever the mind is getting into an extreme position – like saddened by frustrations, overjoyed by praise – quickly return to the breath. At the same time, remember the natural nature of everything, which is full and whole (read: wherever there is pleasure, there is sadness).

If one could maintain the quality of this mindful interaction, not only the patient could be saved from dangerous kind of things, but the healer would also grow into a luminous soul. Borrowing the discovery of a psychiatrist named Murray Bowen – who spends most of his time helping many families with schizophrenia (craziness) – once a therapist stops interfering and stops having a strong desire of changing a patient, the patient then starts showing the signs of healing. Thomas Bien calls it the power of naivety and sincerity. The kind of power that is worth to try by those whose families need to be healed and by other friends whose involved in social community services. The conclusion is simple, meditation was once became the area of religion and spirituality only. Now, it has entered the academic areas that has a rich research culture. An old message reminds, being born as a human without knowing meditation is resembling a man lives in a peaceful jungle yet constantly being in the search of peace.