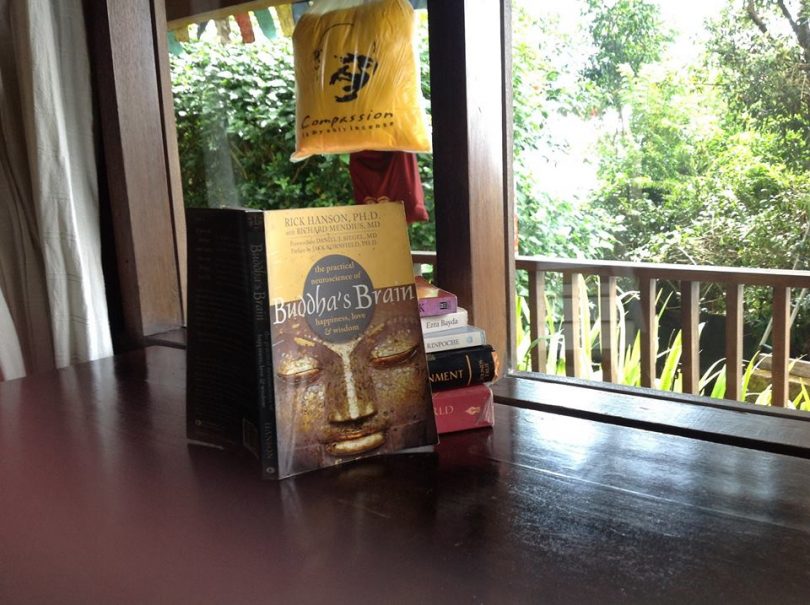 Every era has its own uniqueness. While most statisticians considered uniqueness as an anomaly that is suggested to be abandoned, in the path of deep spirituality, it is believed that the biggest secret is often hidden behind that specific uniqueness. Similar case happened with the following book, “Buddha’s Brain: The practical neuroscience of happiness, love & wisdom”. This book is unique because it is written by a PhD in the field of neuroscience (the science of the human brain) who understands meditation through a very deep achievement. Formerly, meditation is a spiritual practice that being practiced by spiritual seekers in the caves and mountains. Now, the healing and peace benefits of meditation can even be proven in clinical laboratories. Deeper than that, in terms of meditation, not just few scientists of the West whose reaching a deeper level of achievement than the hermits in the caves and mountains. Rick Hanson PhD and Richard Mendius MD (author of the aforementioned book) are a couple of examples in this regard. The way they both tell the effects of meditation on the human brain, not only convincing academically, but also profoundly practical.

One of the studies in this book is about how the habit of the mind could form the brain. The brain itself is the most decisive force in shaping life to be healthy, happy and peaceful. A research result in the field of neuroscience that is being explicitly cited in this book says, when a person is happy, the left front part of the brain is working more actively. In ancient times, people tend to believe that one could only be happy upon being successful, yet, thru this finding the statement could also be reversed: “The state of inner happiness may lead one to be successful”. Hence, the one who changes his mind is eventually changing his life. And meditation is what this book recommends to change the human brain.

In a simple yet profound framework, the behavior of the mind before being touched by meditation is like heavy rain. Everything is being blown out (read: anything that appears in mind is then being transformed into words and action). As a result, a person is not only causing a wound in the soul of others, but also invites others to inflict a soul wound for himself. Once the mind is being touched by meditation, it then begins to behave like the flowing water in the river. The seeds of happiness and peace starts to emerge at this stage. Later, after one is being blessed to attain enlightenment, the mind will then become as beautiful and deep as the ocean.
It is such a simple framework, yet the journey to get there is far from simple. It might even not necessarily be finished in one cycle of life. Nevertheless, an old saying once says, even the journey of a thousand miles always begin with one small step. As a summary, let’s learn meditation. If you cannot sit for hours to meditate, at least treat every present moment – from an angry boss to the song of a kid – as a bell (reminder) to return to the breath. Meet the face of God (experience oneness) in everyday life. Realize that wherever there is a high mountain, there is a deep valley. Wherever there are pleasures, there are sorrows. By reaching this point, you deserve the title of S3* (Smile, Simply Smile).

*S3 is a title (in Indonesian term) that is given upon one is finishing a doctorate level of study (PhD).