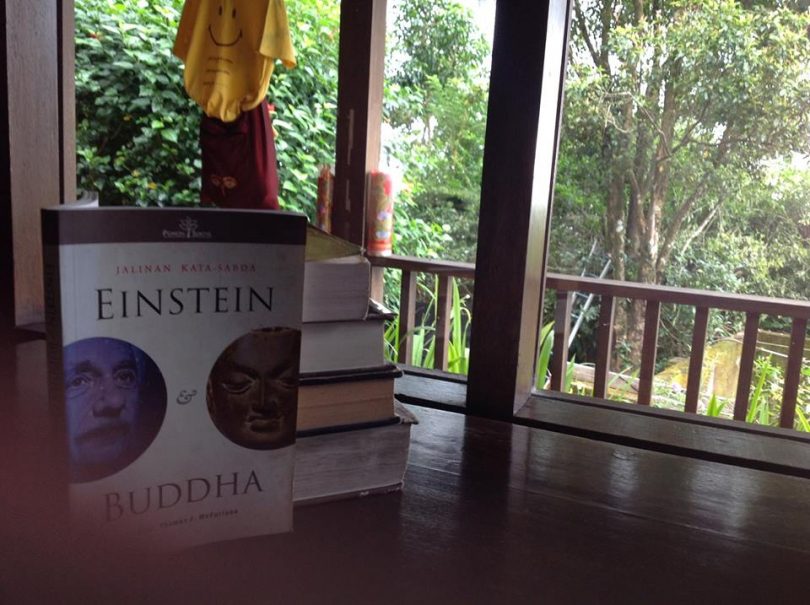 Therefore, the main task to reduce the act of violence could not be done by forbidding people of different faiths to enter certain countries, yet by training people to have a broad and open mind. In this connection, Thomas J. McFarland who wrote the book: “Einstein & Buddha” deserved our respect. While a narrow-minded person is erroneously saying that his religion is right and the others are wrong, an open-minded person like McFarland clearly has a different perspective. The truth, according to what the open-minded people believes, is not only available in our homes, but may also available in the home of others. Therefore, this book is paralleling the scientific of Western knowledge with the holistic of Eastern wisdom. Eventually, the main purpose is not to select for the best one, but to seek for the areas in where the two might complement each other. This is the fundamental difference between a hardened mind that becomes the root of violence and a flexible yet supple mind that becomes the root of peace. A hardened mind like a horse with blinders on. It is only what the eyes can see that being considered right. Some mystics in many religions say: “Man can see more not only with open eyes, but also with an open mind and an open heart”.

Notice what this book says on page 63: “Life has limits but knowledge has none. Trying to understand the infinite using limited tools, would only endanger life”. That is the issue of people whose being burned by violence. Trying to understand the infinite with a limited mind. It then left a question on how to educate the new generation to have an open mind. The spirit that this book is about to share is simple, learning to understand not only the home inherited by the parents, but also the homes of others. In Bali, there is a friend of mine, a Catholic priest who earned a Master’s degree in Islamic studies from a leading University in Egypt. This priest once shared the face of Islam, which is calm, sympathetic, yet beautiful. Thus, it is worth contemplating by the new generation, to not only read the religion that being inherited by the parent. It is also good to read the religion of others every once a while. Its purpose is definitely not to make a convert in terms of religion. Yet to make the soul more luminous. Remember, beautiful souls, when you respect the religion of others, you are in the same time sending a message about how beautiful your religion is. As the message of the Buddha that being quoted in this book, on page 111: “A broad mind is similar to a vast ocean”. Anything that comes into the vast ocean is being transformed into the materials of growth.