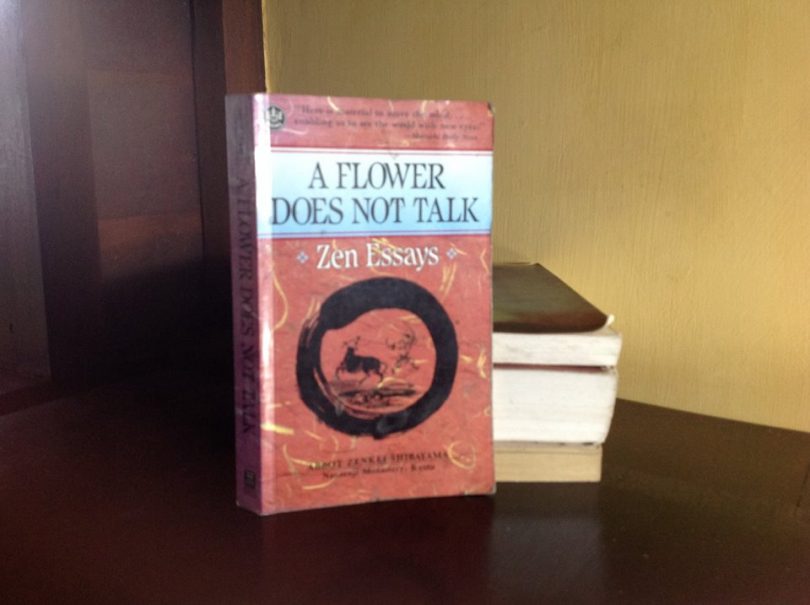 Say it with flowers, says an old saying in the West. Formerly, this message was translated as a form of daily attitude that likes to share flowers. At present, it seems that the message should be translated in a way more deeply. Not only sharing beautiful flowers, but also sharing beautiful attitudes. Moreover in the situation where there is a lot of news that causing anxiety in the souls of many. From the endless political debates, to a suicide news. While most media are taking advantages to accumulate wealth in the midst of violence, the luminous souls are busy sharing a breath of fresh air. In this kind of perspective, the presence of a book titled “A Flower Does Not Talk: Zen Essays” written by Abbot Zenkei Shibayama is indispensable. As in the general understanding of Zen, the dualistic mind together with the inner quarreling – from wrong against right, until the fights of the sinful and the holy – is being acknowledged as the root of all the chaos within. The more controversial it gets, the more chaotic the soul of person becomes. There is plenty of evidence in the community. Revealing it again will only extend the long list of chaos.

As darkness cannot be illuminated by darkness, chaos cannot be resolved by chaos. In the midst of a chaotic sea, only a silent and tranquil soul who has the ability to see and hear. It is this kind of silence and tranquility that sought by the people of Zen. Not through discrediting the government nor debating the holy books, yet by going beyond the chasm of what so-called dualistic minds. There are some whom doing so through meditation, while some others by growing silently in the nature for years. The author of this book, Zenkei Shibayama, is the kind of seeker that grows in the nature silently. Therefore all the symbols he used are taken from the nature. Notice one of the beautiful stanzas in this book: “Like the snow and the water, both are inseparable. No Buddha can be separated from the creations of the nature”. While the suffering dualistic minds are debating the sinful and the holy, the Buddha (enlightenment) with the non-Buddhas, seekers like Shibayama see no wall that separates the sinful and the holy. Everything grows in the same garden of enlightenment.

Inevitably, to collapse the walls of duality is what became the aspiration of the seekers in the path of Zen. When the walls of duality are collapsing, there, someone will then experience the “transmission outside the scriptures”. The inner light is ignited, not by the holy books, but being enlightened by the experience of oneness. The sign could be easily acknowledged, someone finally sees that apparently everything is perfect as it is. Fish swims in the water, birds fly in the air. Both are different, yet both are perfect as the way they are. In times of rain, the chicken are getting away from the water, the ducks plunge themselves into the pond. Each takes an opposite path, yet both are perfect as they are. Notice the most beautiful poem presented in this book: “In the silence, beautiful flowers bloom. In the silence, the flowers withered and thrown into the garbage can.”. In short, all the great titles given by the ordinary people are similar to those beautiful flowers. And all that beautiful flowers will eventually be thrown into the trash. Having arrived in this point, it does not mean someone then left the world of the ordinary. On the contrary, that person will be going back to the ordinary people world by bringing the Light. To be precise, the Light that presence in the form of a beautiful attitude. At least by giving a caring look with the eyes of acceptance. Or through the form of lip that share a friendly smile.

“Innocence is the mother of compassion.”