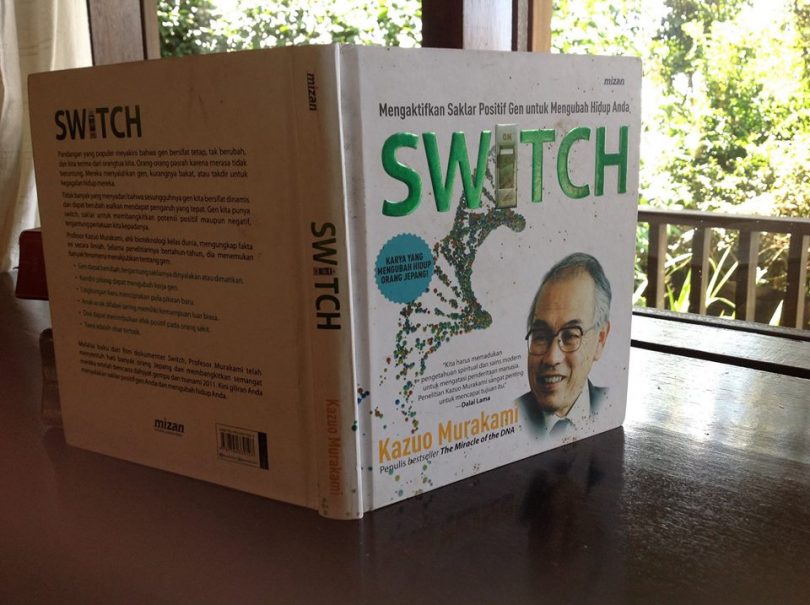 A culture of poverty is the term used by some of the social science experts for the hereditary poverty problems in the least developed countries. Not only material poverty, but also spiritual poverty. The immutable form of gene is one of the accused factors in this regards. If the grandparents are poor, so do the parents, their grandchildren would also be poor. People, for ages, has been imprisoned by their own dangerous mind, thinking that the gene has an immutable form and is inherited. Until the presence of a great professor in biotechnology from Japan whose conducting a research on genes, named Professor Kazuo Murakami, whom then exposing the fact that the gene, apparently, has a mutable form. It is definitely not the outcome of daydreaming, yet the result of a continuous laboratory research over the years. Similar to a dark space, once one find the switch, the dark space would then become brighten.

That is why the title of Professor Murakami’s book is “Switch”. It means that anyone who has the ability to activate the switch of the positive gene within, would not only be experiencing a life changing, yet would also have a very lovely spiritual achievement. Among many other options available to turn on the inner button, there are several ways that being deeply elaborated by this book. From changing the state of the mind to be more positive, growing in a more supportive environment, praying a lot, until showering the soul with laughter and jokes. Everything is being explicitly covered by this book. Even the language used is very simple, as to enable an average person to easily digest the logic that shared.

The most exciting part is on page 133 of this book, where Prof. Murakami states a very lovely message: “Smile is the most powerful switch that could turn ON our genes”. Learning from these scientific findings, never underestimate the importance of a smile. Formerly, a smile was within the areas the spirituality, which was entered with a strong belief without any academic evidence. After years, it has now been scientifically proven in the biotechnology laboratory. Furthermore, as being written in the back cover of this book, the great masterpiece of this biotechnology Professor has transformed and touched the hearts of millions of Japanese people after the devastating earthquake that occurred in 2011. In short, if Japan could recovered from such a catastrophic earthquake only by sharing many smiles, it is now your turn to change your life and improve your spiritual achievement, particularly by sharing more smiles. This has also become one of the important reasons why the meditation class of the spiritual family of Compassion is being titled as “Smileful Meditation”, starting from the end of 2017 on wards.