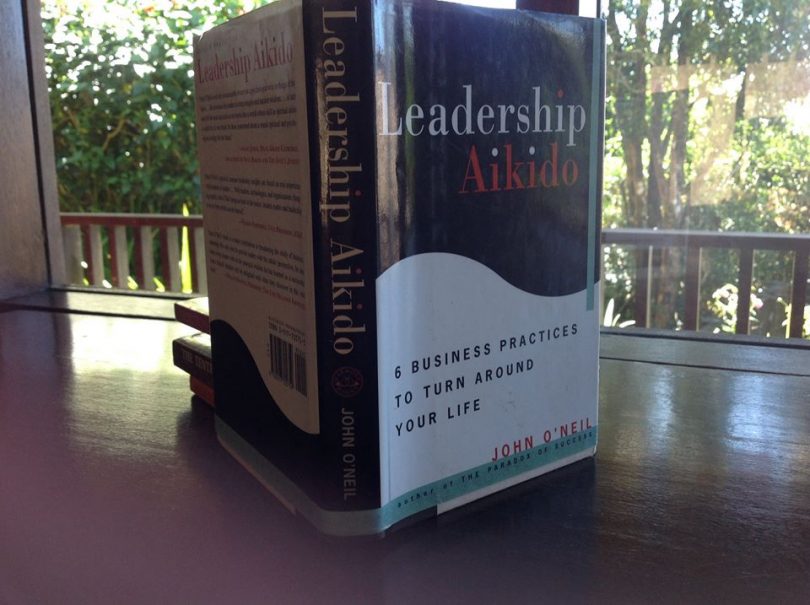 The form of violence is shifting from weapons to words. Whilst weapons hurt the body, words injure the soul. While the period of pain affected by weapon is considerably short, the pain triggered by words can be very prolonged. It is an indispensable message in the era where many of the world leaders and public figures are not well acquainted with the destructive power of words. As often revealed in meditation sessions, the words spoken by someone who has passed away decades ago still left some souls injured. Anyone can hardly imagine the number of mental injuries inflicted by the leaders of the world influential countries whom constantly feeding the media worldwide with their improper choice of words. Within this time frame, John O’Neil’s book “Leadership Aikido” is highly relevant. The author of this book apparently understands these two areas in depth: “leadership and Aikido martial arts”. Any Aikido participants are disallowed to hurt each other, which is one of its unique characteristics. It is not only prohibited to hurt others, yet, self-harm is also forbidden. Hence, the other meaning of Aikido is the art of inner harmony (the art of finding harmony within the self). Its practice hall is called Dojo (a place of enlightenment). For an average person, Dojo is only being seen as a place where people fight. Whereas, that is actually a place where people might attain enlightenment.

This approach of leadership is indispensable in this era, particularly since many leaders who seem succeed in the public sphere, turn out to be failed in private space (read: restless, anxious, angry). A leader with a skyrocketing career yet his soul is trapped in a chasm (full of fear). The concept that Aikido would like to introduce is simple yet profound; when a person capable of defeating the inner enemies (such as fear and ignorance), the threats of the external enemies will naturally decrease. Therefore, in Aikido, every movement of the external enemies is used as an honest mirror of the inner harmony. When a person is being attacked by an external enemy, instead of fighting back, he should return to the ‘hara’ (the inner center point). Any forms of pain caused by others, is an honest input that the concentration of that particular person has shifted from the inner center point. Thus, it is easy to understand the message written on page 13 of this book: “Aikido did not make me a better fighter, it made me a better husband, a better father”. This martial arts is never intended to make someone become a fighter that inflict a lot of injuries, yet to make someone become a luminous husband and father.

Though there are many ways to get there, what Aikido recommends is thru maintaining the inner harmony. An open and flexible mind along with a compassionate heart are the close friends in this regard. Above all, it takes practice to continue to befriend with this wholeness of life. On page 54 of this book, it is written: “Beyond winning and losing”. Learn to go beyond winning and losing. A winner who won by injures others is actually hurting his own soul. Those caring for others are in fact taking a good care of themselves. To become a calm, peaceful, and comforting leader like that, can only be achieved by continuously concentrating on the ‘hara’. An inner center point located a few inches below the navel. Any leaders whose frequently rest in this ‘hara’ point, not only his words would not cause any harms, yet he would also become a role model that followed by the world. Borrowing a story of Mahatma Gandhi; while billion of people were ready to join a massive demonstration against the British invaders, Mahatma Gandhi was still meditating quietly. Whilst being asked for the reason, this bald guy simply replied: “It should be no anger at all”. That is the hallmark of a soul who has grown in the point of ‘hara’.

“The moment you see the light behind a smile,
You will find peace in every step”